A full explanation of the grading/weighting system follows here if you wish to know how it works.

It is much easier to work in units of speed than of pace. Even though these examples are given in speed (km/hr), the calculated results will be published using the corresponding pace in min/km.

The further the distance you run, the slower your average speed will be. For every kilometer above 5km that is run, it is assumed (believe me) that the speed will drop off by 0.08km/hr, i.e. 80meters per hour. At a distance of 10km, the speed would be 5 x 0.08 = 0.4km/hr slower.
If you run 5km at a speed of 10km/hr, you would thus be expected to run 10km at 9.6km/hr. Over 21km the average speed would have been (21-5) x 0.08 = 1.3km/hr slower than the 5km speed, which equates to 8.7km/hr. So how do we compare the performance of one person running 5km with the performance of some other person running 21km? We simply add the 1.3km/hr to the 21k runner’s recorded speed which brings it up to 10km/hr which makes that performance based on speed equal to the 10km/hr of the 5k runner.

What about ‘hillyness’ of the terrain? From my own experience, I have guessed that I might for instance run 10km over a flat track in 60 minutes, but over 300 meters of hills, I would slow down to 70 minutes. This drops the speed by 1.4km/hr. (This newsletter hasn’t got enough pages to include all the calculations, so – again – believe me.) This is a reduction in speed of 5meters per hour for every extra meter of ‘hillyness’. So we follow the same principle as with distance and simply add to or ‘credit’ the runner who goes over 300m of hills with 1.4km/hr more speed. For instance, one runner over a flat route might run at 10km/hr while the guy going over 300m of hills can only manage at 8.6km/hr. To make this a fair competition we simply add 1.4 to 8.6 and based on speed, they both performed at 10km/hr.
Just a note here. My tracker gives climbs and downhills as separate ascent and descent numbers. Strava gives one number which it calls elevation. It appears to me that the ascent or the descent number is approximately the same thing as Strava’s elevation number. (The ascent and descent value never actually records the same altitude change even though it should when starting and stopping at the same place, so we can use the average of the two numbers as the elevation if there is no access to a Strava elevation figure.)

So now we come to age. The AGN uses a table which allows a runner to earn up to 7 points for their club by completing the race within a certain time. Of course, the older guys would never be able to earn any points, so there are different sets of qualifying times for each of the age categories. It has roughly been determined that for each year that you age, your pace will drop by 4 seconds. In other words, if in 2019 you ran 10km at 6:06min/km, you will run it at 6:10min/km in 2020. At 65 years old, you are expected to run 120 seconds slower than when 35 years old. If in 1990 I could run 10km at 4:30min/km, that is why in 2020 the best I can do is 6:30min/km.

The qualifying times used by AGN (and I assume internationally) increase from when you were a Senior runner to when you become a Veteran by 3%, by when you are a Master your have 12% more time than the Senior in which to earn points. In this fashion, Grand Masters have 22% more time, Great Grand Masters are afforded an extra 35% time and the Octogenarian Grand Masters are granted 60% more time.
I have used these ratios to adjust the speed of our VTT competitors in their different age groups. For instance, a Master’s recorded speed is increased by 12% and so on for all the other categories. This is how our Grand Master Petro Vermaak‘s VTT speed was upgraded from 5.2min/km to 4.2min/km.

Gender has now also been taken into account. The ratio of qualifying times between males and females used in the AGN points table for each age category have been incorporated into the grading system.

Corrections to the recorded pace for distance, then for elevation (terrain), then for age category and finally for gender are calculated one after the other and the final figure that is arrived at can roughly be considered to compensate for all of the effects of those factors on the person’s performance. We’ll call the final performance figure the DEAG Adjusted Grading (Distance/Elevation/Age/Gender).

So what about the results of the very first VTT? Well, despite not having taken gender into consideration at that stage, the overall winner was the aforementioned Petro Vermaak! Well done Petro. Even though she only ran 5km on flattish terrain, her pace was fast enough that her age category could adjust her overall adjusted pace to faster than that of any other competitor. Here follow the results of the first VTT on 16 May 2020 which show how the calculated pace changed accumulatively for distance, then for elevation and then for age group. 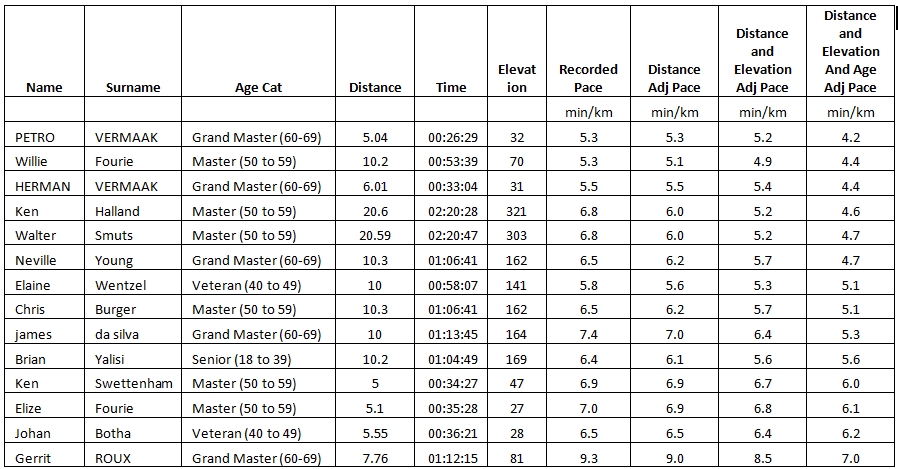 In due course and when we have more participants, I will be able to break these results down into individual age and gender categories, but with only these 14 participants, it is easy enough to glance through the results. For instance it is easy to see that Brian Yalisi won the Male Senior category or that Elaine Wentzel won the Ladies (and in fact the overall) Veteran category.

This VTT competition is not to be taken too seriously – no prize money is involved. It will however give the club a way to perhaps make time trial awards at the end of the year, such as for most kilometers, most VTT’s, best pace and so on. It will also allow club members to gauge their performance over their fellow members as well as over time. Of course, comments and suggestions are welcome. I can’t guarantee that this all makes good sense, but it has provided me with some lockdown fun and hopefully will provide you with some Saturday morning incentive to run.